The World Records in Tourism Attractions

‘The most…’ has been always an enticing description to human beings. This description is the main reason which has made a lot of tourists and travelers put Iran on their itinerary. Being described by “the most” is so attractive that many people are trying to make their country be known by it in various ways. For example, a tower is built at a point in the world to be the tallest tower in the world in order to become renowned as such and attract many tourists.Iran, however, is a place for many record figures, but a lot of people know nothing about this. The following list encompasses 16 instances of “the most” remarkable records that Iran holds among all countries. It would be certainly a pleasure to read about them. 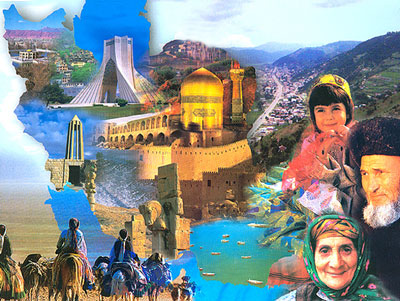 The construction of Persepolis, or as has been recorded in some tablets “The City of the Persian People,” started on the order of King Darius I in 518 B.C., some 55 kilometers northeast of the city of Shiraz on the opposite of Marvdasht Plain. The building took 120 years to become complete.The huge stone complex with an overall area of 135,000 square meters is the biggest Achaemenid building which is totally made of stone. The interesting point is that no mortar has been used to keep the stones together and big pieces of stone have been hinged together without the use of mortar. Of course, in some cases, iron fittings known as swallowtail have been also used. The Persepolis complex consists of seven halls, bas-relief carvings, staircases, columns and two stone mausoleums. 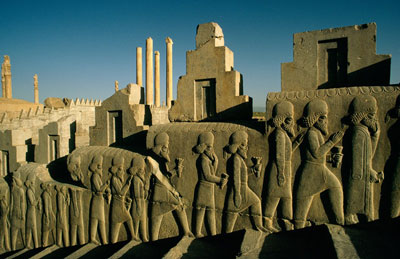 The Hottest Point on Earth

In the Lut Desert, just 80 km north of the city of Shahdad, there is a hill made up of volcanic lava with a total area of 480 square kilometers which is known as “Gandom-e Beryan (roasted wheat)” and also “Rig-e Soukhteh (burned sand)” which is the hottest point on earth with a temperature of 67 degrees centigrade in the shade! There is no form of life recognized at Gandom-e Beryan, which covers a space which measures 200 km long and 150 km wide.The environmental conditions are so harsh that not only prevent the survival of all forms of fauna and flora, but even the bacteria cannot remain alive. As a result, dead bodies are not decomposed, but are dried under intense heat of the Sun.

Before this place was discovered by Professor Parviz Kordavani, the Libyan Desert in North Africa, where temperature goes as high up as 57.7 degrees Centigrade, was considered the hottest place on earth. That record has been now given to Gandom-e Beryan. If you actually want to visit the hottest point on the planet, you should plan your trip between November and April. 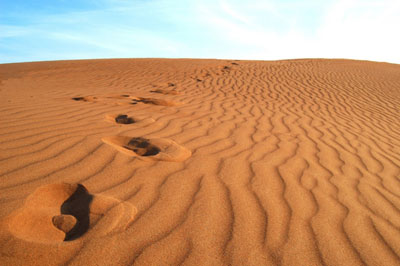 The Tallest Brick Tower in the World

Gonbad-e Qabus Tower was built in 996 AD on the order of Qabus ibn Voshmgir, a king of Al-e Ziyar dynasty, in Jorjan (the present-day city of Gonbad-e Qabus), which was the capital city of their government. The tower stands on the top of Qabus ibn Voshmgir’s tomb.The building has been constructed using bricks and mortar and has been shaped like a multifaceted cylinder, which consist of the foundation, a water reservoir, the body, and a conical dome. Qabus Tower is located on the top of an earthen hill which stands about 15 meters above the ground. The tower is 55 meters high which when added to the height of the hill, increases overall height of the tower from the ground to 70 meters. 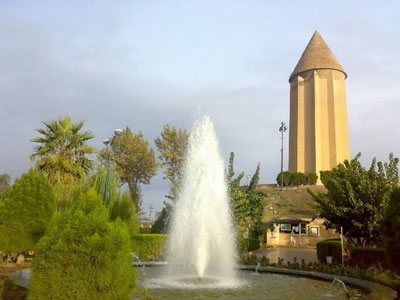 The Biggest Urban Adobe Fabric in the World

The central Iranian city of Yazd is one of the most important historical cities in the country which is also home to a complete collection of buildings related to various periods of time including traditional bazaars, mosques, gardens, buildings, fire temples and so forth.In addition, the city contains the world’s biggest urban adobe fabric with an area of 743 hectares and a perimeter of 5,000 hectares, which is also the most pristine historical fabric in the entire country. 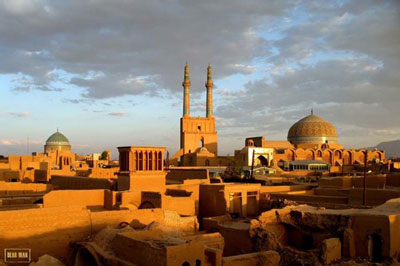 The Biggest Non-Independent Island in the World 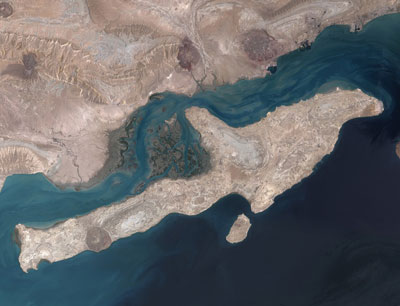 A cedar tree near the city of Abarkouh is believed to be the oldest of its kind in the world as its age has been estimated at about 4,000-4,500 years. The girth of the tree is 11.4 meters on the ground and its height has been estimated at 25-28 meters. According to some local myths, the tree has been planted by the ancient Iranian prophet, Zoroaster. 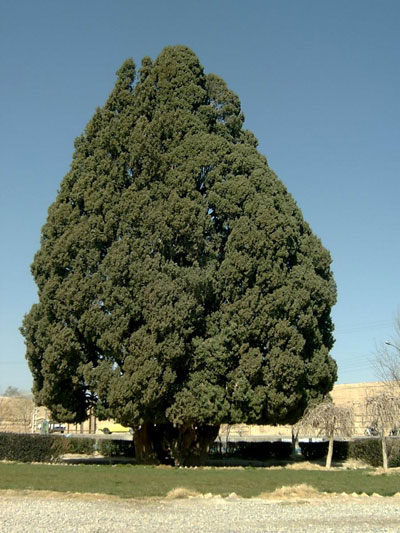 The Highest Ventilator in the World

The octagonal ventilator built at Dowlatabad Garden in Yazd, central Iran, is the tallest ventilator in the world at a height of 33 meters from the ground. 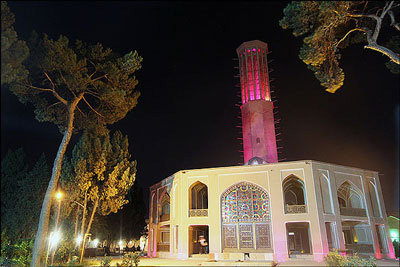 The Biggest Roofed Marketplace in the World

The traditional bazaar of Tabriz in East Azarbaijan Province has an area of about one million square meters. It is the biggest extended roofed brick structure in the world. Due to its location on the ancient Silk Road, the city of Tabriz has been always a major hub of trade in various junctures of history. 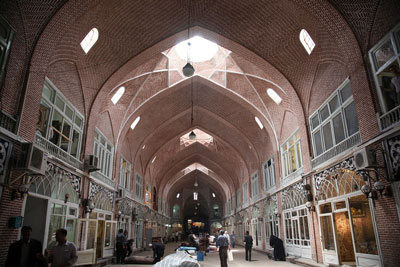 The mouth of Espahbod -e- Khorshid Cave (also a mythological fortress) is located on the side of the Firouzkouh road close to Doab bottleneck in Mazandaran Province. It is 19.75 meters long and 14.25 meters wide, which makes it the highest natural arch in the world. It stands about 15 meters above the ground and was discovered by speleologists in 1956. 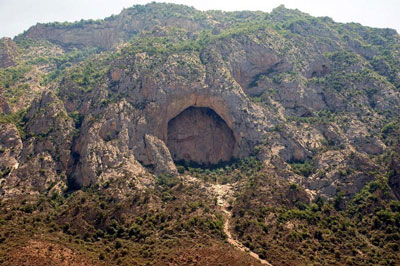 The Oldest Adobe Structure in the World

The beautiful and ancient castle of Narin Qaleh in Meibod, Yazd Province, which is also known by local people as Narenj Qaleh, is the most prominent remaining relic of ancient urban architecture in that part of the country. Narin Qaleh is of high significance from various historical, geographical, architectural, urban, political, military, religious, and mythological viewpoints. The structure has been built on top of a hill which overlooks its surroundings and, therefore, can be seen from a long distance afar. According to some local myths, the castle has been built at the time of the prophet Solomon. 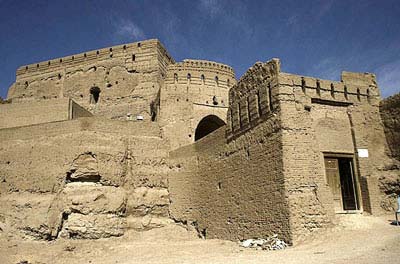 Namakdan (salt shaker) Cave in Iran’s southern Qeshm Island is about 6,580 meters long. Before the cave was discovered, Sodom Salt Cave in Palestine was considered the world’s longest salt cave with an overall length of 5,685 meters. The flow of salty water on the floor of the cave is a pleasant view. The humidity of the island and penetration of water into the cave has led to downpour of saturated salty water over the body of stalagmites continuously changing their outline.Namakdan Cave includes a salty lake with a depth of one meter, which is located 160 meters from the mouth of the cave. There is an underground river which gushes out of the depths of Namakdan Mountain, finds its way out and after solving salt on its way, comes out on the slopes of the mountain. The water flow has created a natural pool in the pit which is located opposite to it whose color is white. 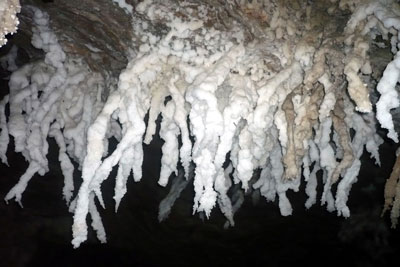 Lake Urmia is a salt lake in northwestern Iran near Iran’s border with Turkey. The lake is between the Iranian provinces of East Azerbaijan and West Azerbaijan, west of the southern portion of the similarly shaped Caspian sea It is the largest lake in the Middle East, and the sixth largest saltwater lake on earth, with a surface area of approximately 5,200 km² (2,000 mile²), 140 km (87 mi) length, 55 km (34 mi) width, and 16 m (52 ft) depth.It is the saltiest lake on the world now as the water of lake is getting less and less. 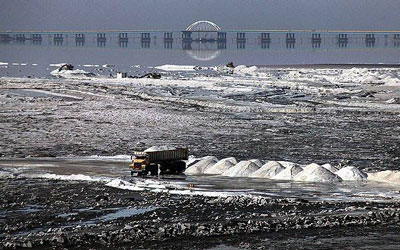